Subscribe to The FREE Munsterlander Training Course to learn how you can easily turn your unruly and disobedient Munsterlander into a loving, friendly companion. Step-by-step tips for puppy housebreaking, dog obedience training and stopping bad behavior.
Sign Up 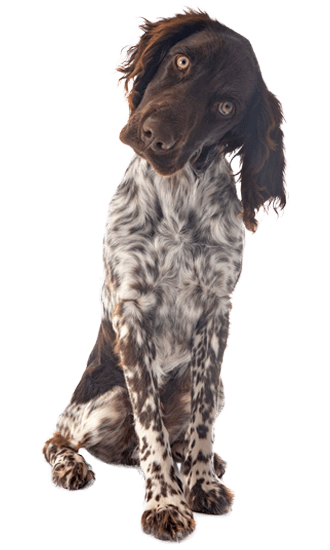 Country of Origin, History of Munsterlanders

The Large Münsterländer evolved in Münster, Germany from its smaller cousin in the 1800's. Its excellent nose properly indicates the correlation to the Lower Saxon area; its similar conformation to the German Longhaired Pointer and Continental setters suggests that connection as well. Many insist that the Grosser Münster was once simply the black and white Longhaired Pointer.

Breed Selector Tool - is the Munsterlander the right breed for you?

Is the Munsterlander the right breed for you and your family?

Are you aware dogs also have a learning style that can greatly affect their ability to housetrain as well as be trained correctly. Evaluate your Munsterlander's learning style and personality using our free Learning Style tool so that you are better able to provide him with the proper Munsterlander training methods.

Is your Munsterlander dominating over you?

Do you make these mistakes with your Munsterlander?

Are you inadvertently snow-balling bad behavior in your Munsterlander? Evaluate your Dog Training Style from our Free Tool and learn how best to deal with your dog.

A General Description of the Breed

The Large Münsterländer possesses a well-balanced and athletic conformation suggestive of easy, elegant and steady movement and drive. The breed's head is sufficiently broad and slightly rounded giving an impression of stability, even dignity. Solid black with a white snip or star is allowed. The body is generally white with black patches, flecked and/or ticked. Its broad, round-tipped ears hang close to the head. They should have a scissors bite. The eyes are dark and heavy lidded. The coat is long and dense, neither curly nor coarse. It has feathers on the ears, front and hind legs, and tail. There should be no feathering on the backside of the upper feet, so that you can see the 90 degree angle.

Males usually have larger heads, longer hair on the chest and more feathering than females. When the dog stands, his extended hind feet should stand in a right angle to the ground. It has firm, strong feet with ample hair between the black-nailed toes. The tail is carried horizontally and may be left intact or have a just a tiny bit of the end removed.

The body of a Small Münsterländer is lean yet powerful and not prone to becoming overweight. Coloration is large patches of brown on a ticked or solid white background. The soft coat is of medium length 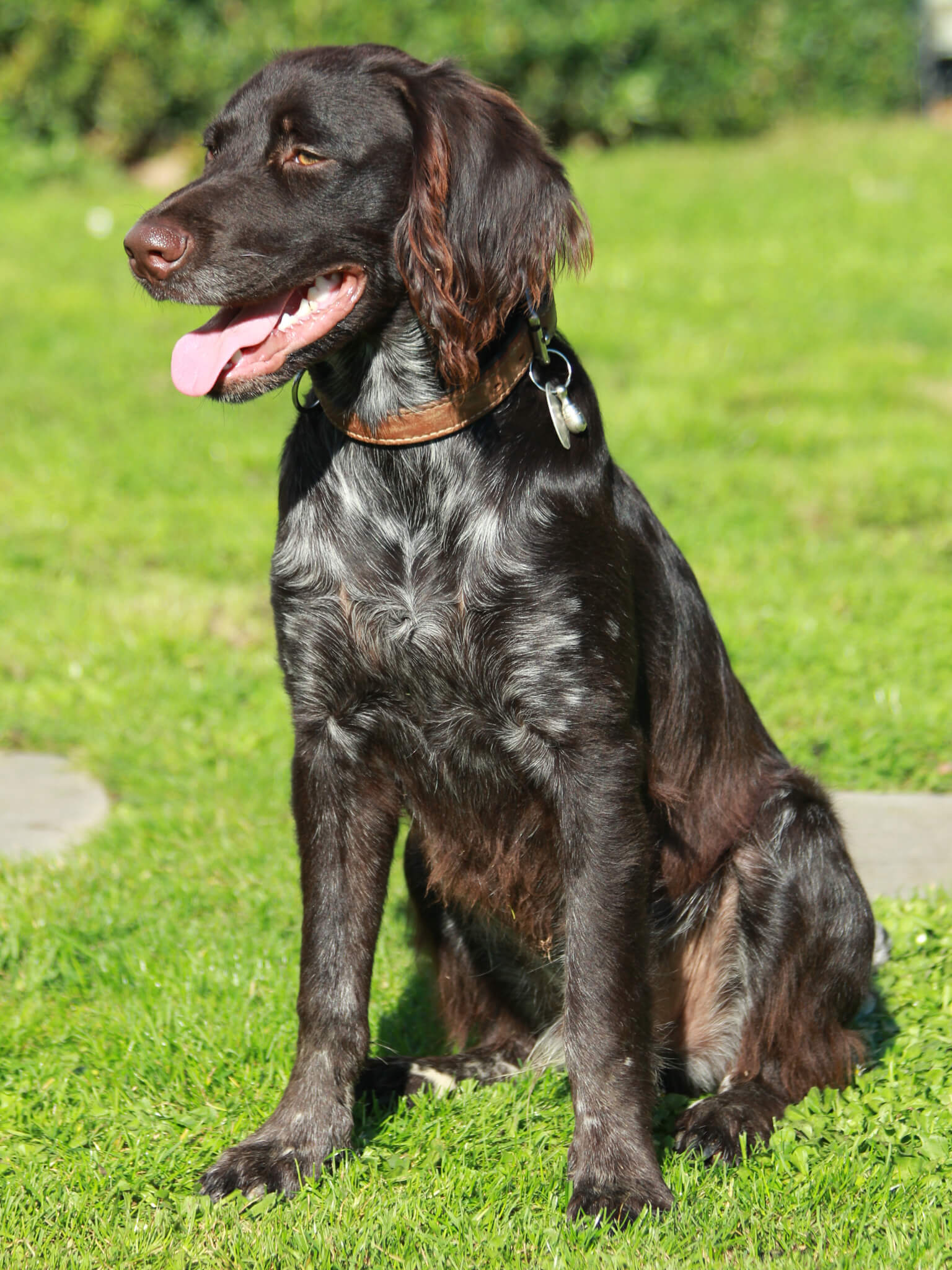 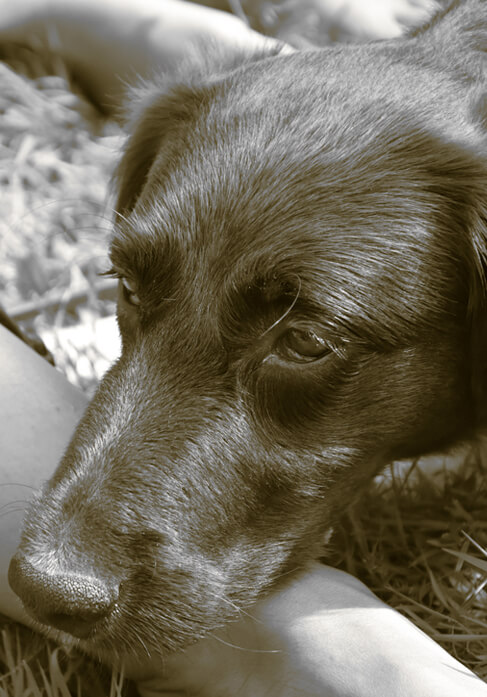 Temperament of the Breed

Both the Large and Small Münsterländer are courageous, loyal, friendly, cheerful, intelligent and obedient breeds. They make wonderful house companion dogs. They are working dogs, are suitable for children, but not good guard dogs.

The LMs grow very dependent on their owners and hate being left alone. This dog will adapt to any terrain and every type of hunting. It is resistant to fatigue and bad weather. Particularly appreciated for the sureness of its point and the precision with which it retrieves, specially from water.

It loves water and has shown itself to be a dedicated enemy of birds of prey. When it spots a bird or rabbit it will usually freeze in its motion.Its head will point towards the prey and its whole body shifts slightly forward; one of the front feet will often be off the ground. The rapid motion freeze will prevent the prey from being alarmed and shows the hunter where the prey is hiding. Described by the German word "Vorsteh" (hund).

The SMs have a very strong drive to follow their keen sense of smell. They love swimming, too. The remain a keenly focused, even driven, hunter-pointer-retriever when in the field. They are not suited to life in a kennel because of their sociable nature and need to interact with people.

SMs will pick an individual person to bond most closely with, typically the one who hunts with the dog, but will revel in the company of the rest of the family, too. When raised with other pets in the household, such as cats, they can coexist happily though they may enjoy a game of chase and point. Unfamiliar small animals outdoors will not be tolerated in the same way.

The Large Münsterländer is not recommended for apartment life. They are moderately active indoors and will do best with at least a large yard. The Münsterländer wants to play (with a bone or toy), specially when it is outdoors. They might attack smaller animals.

As with all their hunting relatives, they require sufficient exercise. They need to be taken on a daily, brisk walk, run or jog. In addition, engaged in active play, it will usually be tired in 20 minutes. Two to three 20-30 minute sessions a day will make this dog happy. They make great companions for active, outdoor people.

The Small Münsterländer requires more than an hour's exercise everyday and gentle and patient training, which provides excellent results. They are also strong-willed and an owner who is inconsistent or indecisive might find that his dog is hard to control. Both voice and hand signals are used, and an SM looks back at the hunter for silent signals at intervals when on hold or pointing.

They respond well to training and pick up obedience trainings fast. Münsterländers can easily learn to come and sit on command in the first six months of life.

The bitch of this species has a shorter coat and will not need much grooming. A brushing every 3-4 days should be enough. The dog has a longer coat and needs a good brushing every second day. This breed is a seasonally heavy shedder especially in the spring. Regular grooming will keep the shedding down.

Some lines are prone to hip dysplasia although it is not common in this breed.

Train Your Munsterlander To Listen To You

Sign up for our Free Munsterlander Mini Course to have a housebroken, obedient dog that happily comes to you every time you call.

Whereas other dog training related web sites and books offer generic information for dogs in general, ours is the ONLY web site that offers Munsterlander information specifically, from a renowned panel of experts - because as you probably know, Munsterlanders have their own special training requirements that other dogs don't have.

The Munsterlander training information you will read here was developed by a panel of renowned dog training experts whose combined wisdom represents nearly 100 years of specialist experience training dogs.

Did you know we have over 875,000 subscribers of the FREE Munsterlander Training mini course?
You can also subscribe for free, but first...
Read what other dog owners just like you found when they subscribed to this mini course:

"The mini-course gives insights into the way a Munsterlander thinks and reacts to behavior training. I have been able to stop T Bone's chewing habits because of this course."