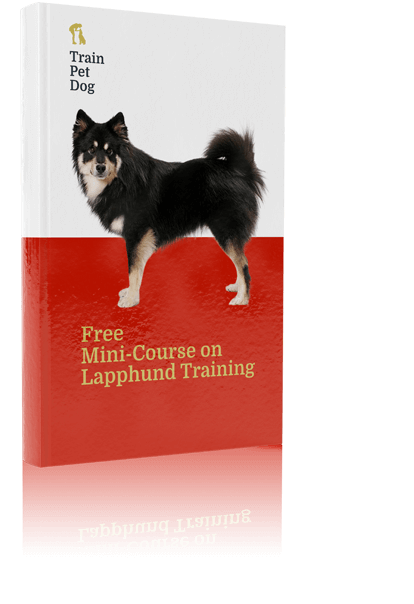 Subscribe to The FREE Lapphund Training Course to learn how you can easily turn your unruly and disobedient Lapphund into a loving, friendly companion. Step-by-step tips for puppy housebreaking, dog obedience training and stopping bad behavior.
Sign Up 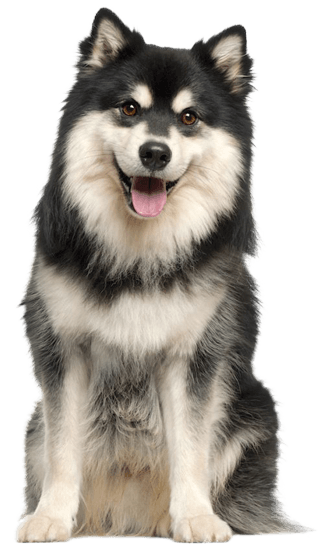 Country of Origin, History of Lapphunds

The Finnish Lapphund descends as far back as from 7000BC and originates from the dogs kept by the Lapp people. They lived in the area known as Lapland which incorporated Sweden, Finland and parts of northern Russia and Norway. In Finland, the first breed standards were set in 1945 by the Finnish Kennel Club.

It is believed that these dogs were the result of a cross between the Karelian Bear Dogs and the reindeer dogs.

In 1960, the various Finnish kennel associations were unified, and in 1966 the breeds were reassessed. This resulted in the formal definition of two breeds: the Lapponian Herder (1966), and the Finnish Lapphund (1967). It has been recorded in the Foundation Stock Service since 2001.

The first Swedish Lapphund breed standard was accepted already in 1944 and ever since it has been revised several times.

Breed Selector Tool - is the Lapphund the right breed for you?

Is the Lapphund the right breed for you and your family?

Are you aware dogs also have a learning style that can greatly affect their ability to housetrain as well as be trained correctly. Evaluate your Lapphund's learning style and personality using our free Learning Style tool so that you are better able to provide him with the proper Lapphund training methods.

Is your Lapphund dominating over you?

Do you make these mistakes with your Lapphund?

Are you inadvertently snow-balling bad behavior in your Lapphund? Evaluate your Dog Training Style from our Free Tool and learn how best to deal with your dog.

Do you know how many calories your Lapphund needs every day and how many cups of food you should be giving it every day? Click here to use our Lapphund Calorie Calculator.

A General Description of the Breed

As a typical member of the Spitz group, the Finnish Lapphund has a distinct fox-like appearance. The Finnish Lapphund is a medium sized, strongly and firmly built dog. It is slightly longer than it is high at the withers. It is marked by a broad head and a straight, evenly tapering muzzle. It is distinguished by medium sized, broad, mobile ears, dark eyes, long, strong neck and a deep brisket. The tail, covered with profuse and long hair, is carried curving over the back. The Lapphund has a profuse double coat, with a short, fluffy undercoat and a longer, coarse topcoat.

The coat makes the dog waterproof as well as resistant to extreme cold. A wide variety of colors are found in the breed: white, black, red, brown, sable and wolf-sable. One of the most common color combinations is black and tan: a predominantly black dog with tan legs and face. One of the unusual facial markings sported by them is "spectacles", where a ring of lighter colored hair around the eyes gives the impression that the dog is wearing spectacles.

The only permitted colors for a Swedish Lapphund are black and dark brown. The coat is coarse and thick with a dense undercoat. Both males and females of this species have a distinctive mane.

For both The Finnish Lapphund and the Swedish Lapphund, the standard is 46-52cm at the withers (above the shoulder) for a male dog, and slightly smaller 41-47cm for a bitch.

A typical male of 49cm height normally weighs 17-19kg, but the breed has a weight range of 15-24kg, depending on the size of the dog. 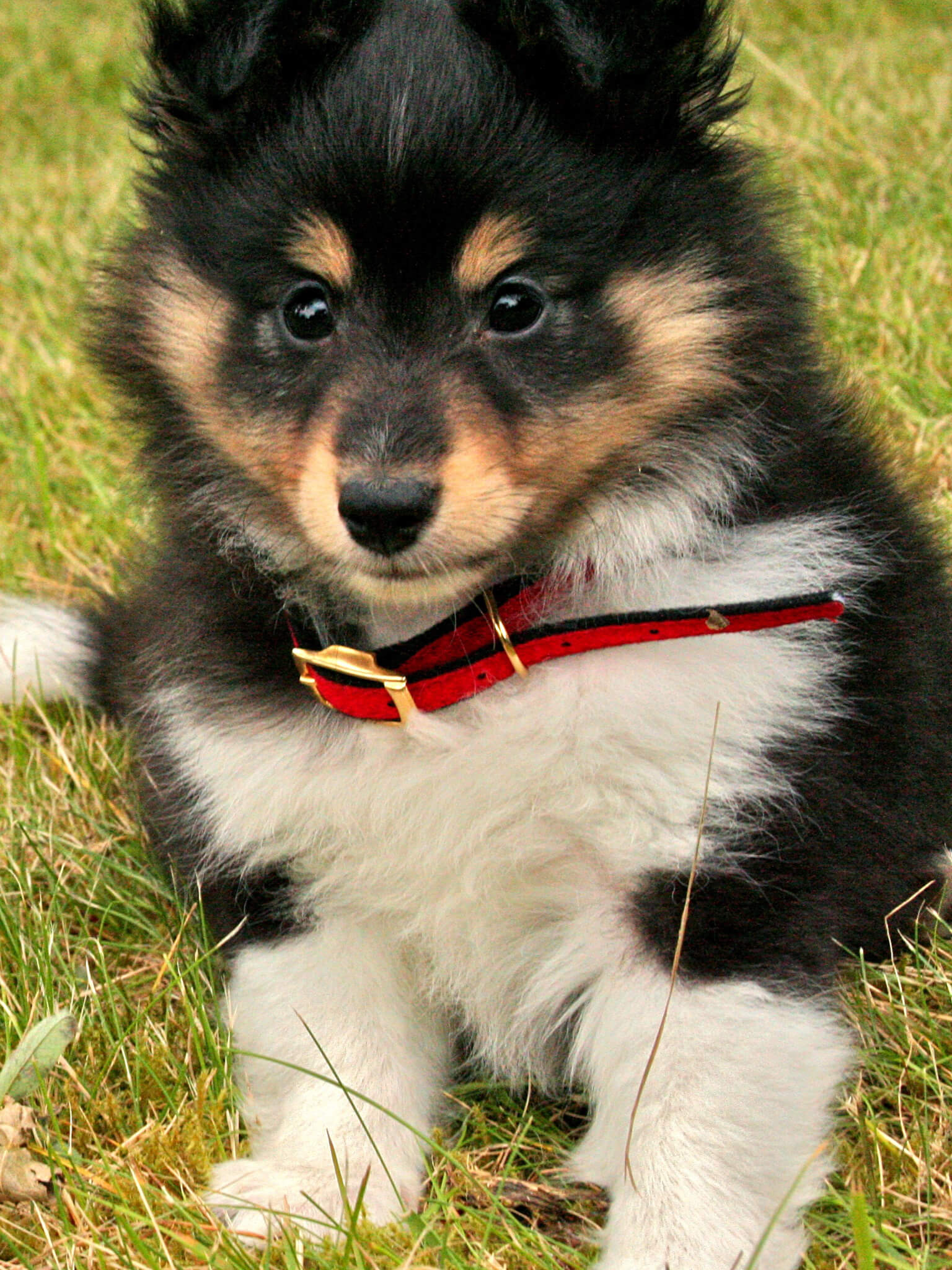 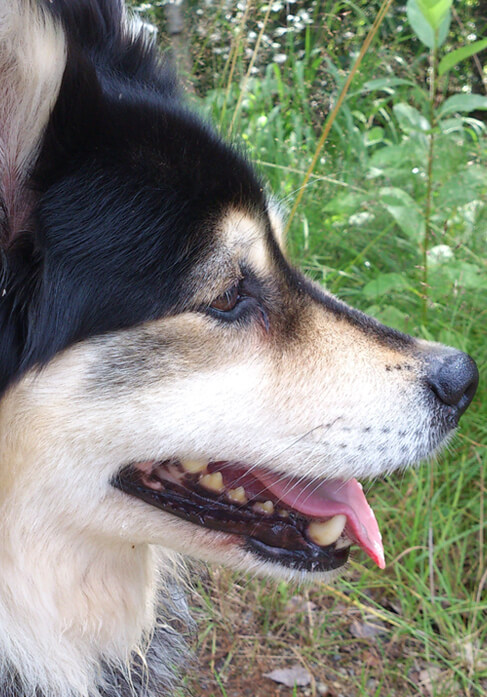 Temperament of the Breed

The Finnish Lapphund is charismatic, cuddly, calm, friendly, sociable, adaptable and very faithful. They have a gentle and affectionate nature, and are particualrly good with children, people with disabilities, the elderly and other animals. They are always ready to work for and please their masters. When young, some Lapphunds have a tendency to nip at the heels or hands of their owners, but this can easily be corrected. They have a moderate tendency to bark. They will notify their owners of visitors, but do not tend to show aggression.

The Swedish Lapphund is lively, humble, co-operative, loyal protective alert. The breed has somewhat strong sense of territory, but is friendly towards strangers. They possess strong herding instincts and can be very noisy as they have a very high tendency to bark. They like to please but also likes doing things their own way. They make great companions. However, for that, it is very important to socialize them while they are young.

The Finnish Lapphunds and Swedish Lapphunds are well suited to apartment life, specially if they get a yard to run around in. They make wonderful companions and pets. They are good with children and other animals.

They, specially the Swedish Lapphund, crave for human contact and can get very upset and vocal if left alone. So one shouldn't take up a Swedish Lapphund as a pet unless one is sure that somebody or the other will be there to keep the dog constant company at all times.

The Finnish Lapphund makes the ideal outdoor companion. It is very energetic and needs a minimum of 60-80 minutes of daily workout to keep fit and happy. It loves to run. As they are extremely intelligent and easy to train, the Finnish Lapphund is one of the most suitable of breeds to train for dog sports such as flyball and agility.

While considered to be mainly a family pet, the Swedish Lapphund is not cut out for the sofa cushion. It requires a great amount of exercise (at least two hours a day) and mental stimulation. The breed is suitable for most dog sports, but training might require imagination, since the breed is also said to be somewhat stubborn. if their minds are not exercised, then they can be destructive and are known to enjoy digging.

The Finnish Lapphund sheds moderately. Regular brushing, preferably everyday, is required because of the abundance of their coats. Occasional baths would suffice. Trimming is generally not necessary.

Even though the coat of the Swedish Lapphund is impressive, it is surprisingly low maintenance. It repels snow and water, but needs regular brushing as well as a wash once a year.

The Finnish Lapphund is known to be one of the healthiest breeds in Finland. Known medical issues include Generalized Progressive Retinal Atrophy (GPRA) and hereditary cataracts. The ethical standard in most countries require the stud dogs to be hip-scored, but the incidence of Hip Dysplasia is low.

Generally the Swedish Lapphund is also a healthy breed. Some of the breeding stock has been found to exhibit epilepsy, Hip Dysplasia and PRA, and therefore breeders are encouraged to examine the dogs regularly.

Group: The Finnish Lapphund and the Swedish Lapphund are breeds of the Spitz family. As they were originally bred to be reindeer herders, they can be said to belong to the herding or pastoral group.

Train Your Lapphund To Listen To You

Sign up for our Free Lapphund Mini Course to have a housebroken, obedient dog that happily comes to you every time you call.

Whereas other dog training related web sites and books offer generic information for dogs in general, ours is the ONLY web site that offers Lapphund information specifically, from a renowned panel of experts - because as you probably know, Lapphunds have their own special training requirements that other dogs don't have.

The Lapphund training information you will read here was developed by a panel of renowned dog training experts whose combined wisdom represents nearly 100 years of specialist experience training dogs.

Did you know we have over 875,000 subscribers of the FREE Lapphund Training mini course?
You can also subscribe for free, but first...
Read what other dog owners just like you found when they subscribed to this mini course:

"The mini-course gives insights into the way a Lapphund thinks and reacts to behavior training. I have been able to stop T Bone's chewing habits because of this course."