Subscribe to The FREE Cockapoo Training Course to learn how you can easily turn your unruly and disobedient into a loving, friendly companion. Step-by-step tips for puppy housebreaking, dog obedience training and stopping bad behavior.
Sign Up 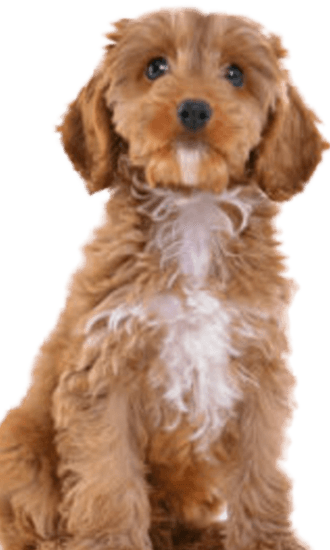 Country of Origin, History of Cockapoos

There is no known date or person who started the Cocakpoo breed, but it is believed it may have existed naturally over the years. However, it was only in the 1960s that designer dog breeders in North America mixed Cocker Spaniel and Poodle to develop Cockapoos to have an intelligent, affectionate, companion dog. As demand for mixed breed dogs kept increasing, Cockapoos became more and more popular.

Breed Selector Tool - is the Cockapoo the right breed for you?

Is the Cockapoo the right breed for you and your family?

Are you aware dogs also have a learning style that can greatly affect their ability to housetrain as well as be trained correctly. Evaluate your Cockapoo's learning style and personality using our free Learning Style tool so that you are better able to provide him with the proper Cockapoo training methods.

Is your Cockapoo dominating over you?

Do you make these mistakes with your Cockapoo?

Are you inadvertently snow-balling bad behavior in your Cockapoo? Evaluate your Dog Training Style from our Free Tool and learn how best to deal with your dog.

Do you know how many calories your Cockapoo needs every day and how many cups of food you should be giving it every day? Click here to use our Cockapoo Calorie Calculator.

A General Appearance of the Dog

The Cockapoo is a cross-breeding of a Cocker Spaniel and a Poodle, which can be a Teacup Toy, Toy, Miniature, or Standard. If it is a Toy, you get a Toy Cockapoo; if it is a Miniature, it is simply a Cockapoo or a Mini Cockapoo; and if it is a Standard, it is a Maxi Cockapoo.

Cockapoos normally have a rounded head with floppy ears, dark eyes that appear to be asking you to do something with them, a black nose, and a well-proportioned body that is low to the ground like a Cocker rather that having longer legs like the Poodle. The medium-length tail ends in a defined point (and is not cropped like the Poodle’s). Their coat is usually soft and curly.

The Cockapoo was one of the first designer dogs, dating back to the 1960s. There have been enough generations of crossbreeding that many people are now breeding Cockapoos to Cockapoos and getting a rather true breed. There are now three Cockapoo breed clubs, meaning that standards for the breed are being established. They are a good dog for a family wanting a small dog or someone who hasn’t had a dog previously.

This is a happy, playful, and intelligent breed that trains easily and loves people. They hardly shed, so are fairly hypoallergenic. They are so affectionate, they will claim your lap as theirs and accompany you everywhere, including the bathroom. They make a great therapy dog.

Cockapoos can live in a variety of situations from apartments to large homes with lots of yard space. They do well if left alone all day if they have a walk, playtime, and attention when you are home and can tolerate hot and cold weather. They normally love everyone, including strangers, other pets, and children of all ages if they are gentle with the dog.

The Cockapoo coat can be silver, cream, white, black, brown, or red, or a combination. It is usually curly or wavy and fairly dense. Their coat can be left long and natural or they can be groomed and have the coat cut to two to three inches in length. 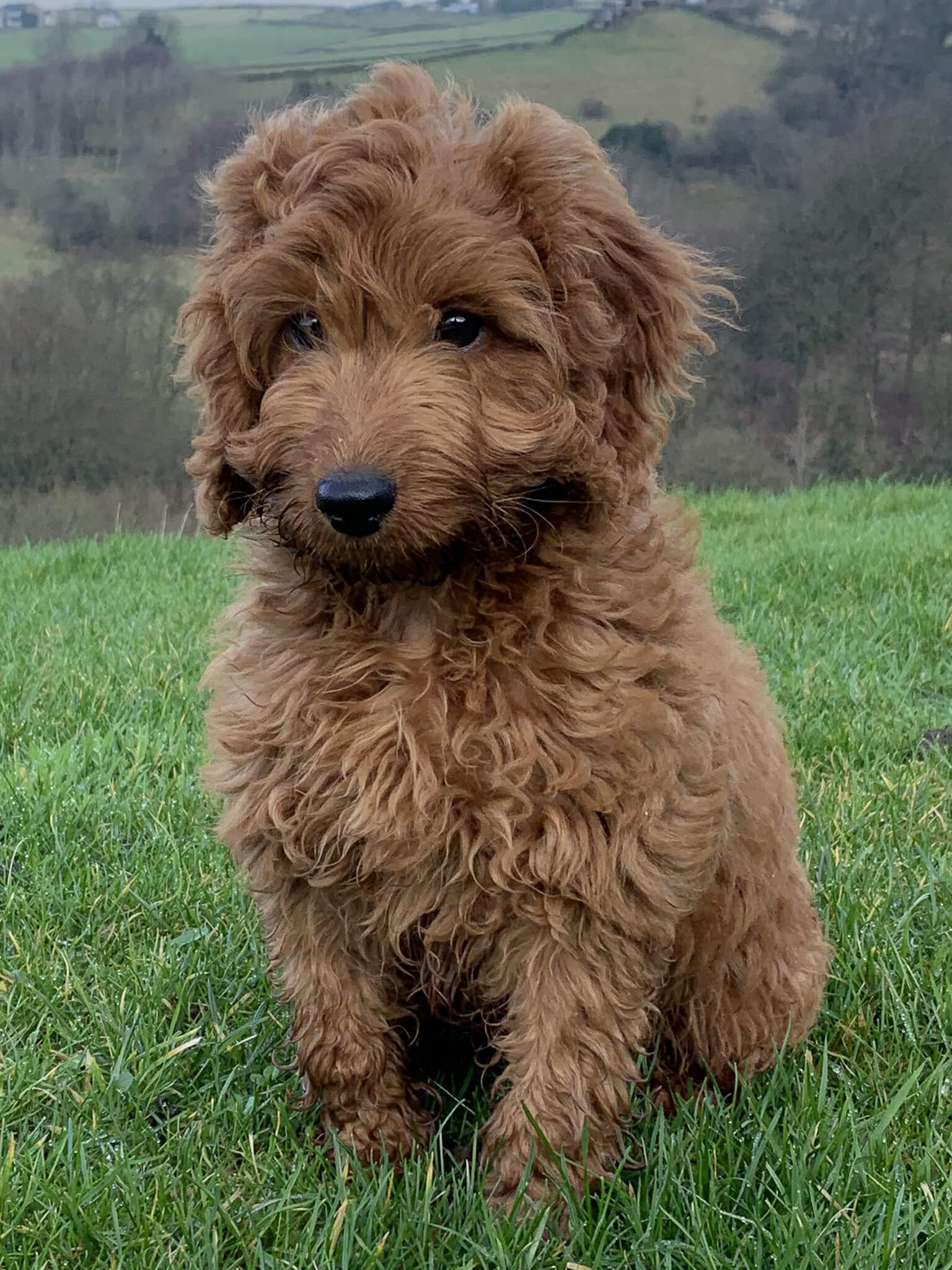 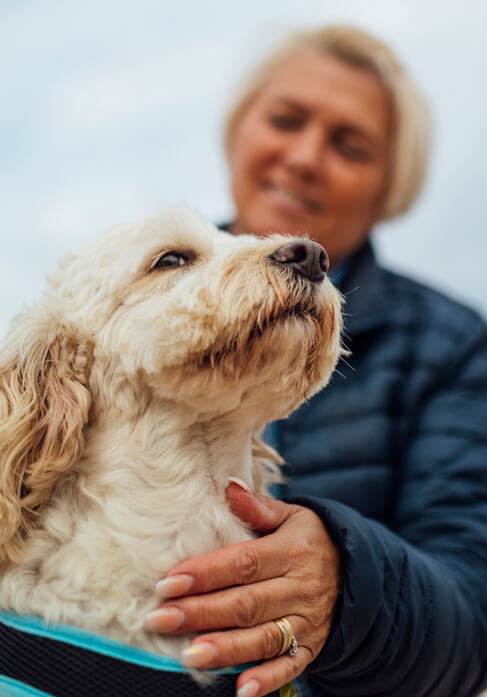 Temperament of the Dog

The Cockapoo is a the perfect companion. He wants to please you and he is easy to please. He is intelligent and sweet. He is not prone to anxiety unless left alone for very long periods every day and not given opportunity to play with other pets or people and socialize. He is easy to train with positive reinforcement and can achieve high levels of obedience with time, patience, and repetition (and lots of praise and some treats).

These cuddly, happy, smart dogs will remind you of a live teddy bear. They tend to get along with other pets and people of all ages. They love to play and to learn new things. They are easy to train and socialize and love to go places or take walks and meet new people and dogs. They will enjoy visiting hospitals or nursing homes as a therapy dog. They have a lively spirt and great stamina.

Better suited to an indoor or outdoor lifestyle?

They can be outdoors in a fenced yard for short periods of time, but should never be left outside for extended periods. They love to be wherever their family is! Thus, they will want to be indoors when you are indoors or when you are gone from home.

Are they suited to homes with kids?

Kids are fine with the Cockapoo because that makes more people to give them attention and play with them. Teach kids how to properly play with dogs.

The Cockapoo loves to learn and will housetrain easily and can start learning commands by 9 or 10 weeks old. He will love to continue to learn all his life, so consider teaching him obedience commands, tricks, agility, and more.

Cockapoos are busy dogs who love to stay active, so plan on getting your dog a variety of toys, teaching your dog obedience, playing games, taking walks, and perhaps doing agility together. Don't forget they love to follow you around and lay in your lap when you sit down. If you are not able to be active, a few short walks for pottying will suffice because the Cockapoo can entertain himself with his toys and anything you are doing.

A weekly brushing will be enjoyed by your Cockapoo and it will keep his coat in good condition. Their coat can be left long and natural or they can be groomed and have the coat cut to two to three inches in length.

Be sure to cut their nails at least once a month, brush their teeth 2-3 times a week, and check their ears for redness or debris when you brush them. If they are outdoors a lot, a bath may be in order.

Be sure to brush your dog's teeth daily, check and clean his ears (2-3 times a week), and cut his nails (once or twice a month). Small breeds are prone to dental issues.

The Cockapoo needs at least one good walk a day to keep it from becoming overweight and to socialize it. An overweight Cockapoo is prone to back problems as well as other health issues. Therefore, do not free feed, but give your dog two measured meals a day. Be sure to keep your Cockapoo on a leash when it is out of your fenced yard.

Cockapoos are prone to allergies and ear infections. As a young dog, the Cockapoo is fairly healthy, but as it ages, it can have any of the problems of either the Cocker Spaniel or the Poodle. These include cataracts, knee issues, hip and elbow dysplasia, hypothyroidism, von Willebrand’s disease, and liver disease.

Train Your Cockapoo To Listen To You

Sign up for our Free Cockapoo Mini Course to have a housebroken, obedient dog that happily comes to you every time you call.

Whereas other dog training related web sites and books offer generic information for dogs in general, ours is the ONLY web site that offers information specifically, from a renowned panel of experts - because as you probably know, s have their own special training requirements that other dogs don't have.

The Cockapoo training information you will read here was developed by a panel of renowned dog training experts whose combined wisdom represents nearly 100 years of specialist experience training dogs.

Did you know we have over 875,000 subscribers of the FREE Cockapoo Training mini course?
You can also subscribe for free, but first...
Read what other dog owners just like you found when they subscribed to this mini course:

"The mini-course gives insights into the way a Cockapoo thinks and reacts to behavior training. I have been able to stop T Bone's chewing habits because of this course."